What is Crohn’s disease?

Crohn’s disease is a chronic inflammatory process primarily involving the intestinal tract. Although it may involve any part of the digestive tract from the mouth to the anus, it most commonly affects the last part of the small intestine (ileum) and/or the large intestine (colon and rectum). 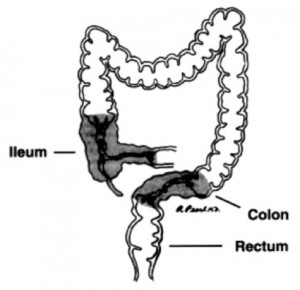 Crohn’s disease is a chronic condition and may recur at various times over a lifetime. Some people have long periods of remission, sometimes for years, when they are free of symptoms. There is no way to predict when a remission may occur or when symptoms will return.

What are the symptoms of Crohn’s disease?

Who does it affect?

Any age group may be affected, but the majority of patients are young adults between 16 and 40 years old. Crohn’s disease occurs most commonly in people living in northern climates. It affects men and women equally and appears to be common in some families. About 20 percent of people with Crohn’s disease have a relative, most often a brother or sister, and sometimes a parent or child, with some form of inflammatory bowel disease.

Crohn’s disease and a similar condition called ulcerative colitis are often grouped together as inflammatory bowel disease. The two diseases afflict an estimated two million individuals in the U.S.

The exact cause is not known. However, current theories center on an immunologic (the body’s defense system) and/or bacterial cause. Crohn’s disease is not contagious, but it does have a slight genetic (inherited) tendency. An x-ray study of the small intestine may be used to diagnose Crohn’s disease.

How is Crohn’s disease treated?

Initial treatment is almost always with medication. There is no “cure” for Crohn’s disease, but medical therapy with one or more drugs provides a means to treat early Crohn’s disease and relieve its symptoms. The most common drugs prescribed are corticosteroids, such as prednisone and methylprednisolone, and various anti-inflammatory agents.

Not all patients with these or other complications require surgery. This decision is best reached through consultation with your gastroenterologist and your colon and rectal surgeon.

Shouldn’t surgery for Crohn’s disease be avoided at all costs?

While it is true that medical treatment is preferred as the initial form of therapy, it is important to realize that surgery is eventually required in up to three-fourths of all patients with Crohn’s. Many patients have suffered unnecessarily due to a mistaken belief that surgery for Crohn’s disease is dangerous or that it inevitably leads to complications.

Surgery is not “curative,” although many patients never require additional operations. A conservative approach is frequently taken, with a limited resection of intestine (removal of the diseased portion of the bowel) being the most common procedure.

Surgery often provides effective long-term relief of symptoms and frequently limits or eliminates the need for ongoing use of prescribed medications. Surgical therapy is best conducted by a physician skilled and experienced in the management of Crohn’s disease.

What is a colon and rectal surgeon?

Colon and rectal surgeons are experts in the surgical and non-surgical treatment of diseases of the colon, rectum and anus. They have completed advanced surgical training in the treatment of these diseases as well as full general surgical training. Board-certified colon and rectal surgeons complete residencies in general surgery and colon and rectal surgery, and pass intensive examinations conducted by the American Board of Surgery and the American Board of Colon and Rectal Surgery. They are well versed in the treatment of both benign and malignant diseases of the colon, rectum and anus and are able to perform routine screening examinations and surgically treat conditions if indicated to do so.

how to prep for surgery

Dr. Rivadeniera will periodically email educational newsletters and invitations to local health seminars. If you are interested in being on his email list, please fill out the following form.